Windows 10 offers many customization options, but they are either difficult to access or require tinkering with Windows registry. Thankfully, there are many third-party tools that can make it easier to customize Windows 10 with just few clicks.

In today’s post, we will list down 8 tools you can use to customize Windows 10 according to your taste. Whether you are a pro Windows user or a novice, these tools should help you get the best Windows experience.

O&O ShutUp10 means you have full control over which comfort functions under Windows 10 you wish to use, and you decide when the passing on of your data goes too far. Using a very simple interface, you decide how Windows 10 should respect your privacy by deciding which unwanted functions should be deactivated.

O&O ShutUp10 is entirely free and does not have to be installed – it can be simply run directly and immediately on your PC. And it will not install or download retrospectively unwanted or unnecessary software, like so many other programs do these days!

This usually shows the cell tower the router has connected to!

Cellmapper.net shows the towers.. the number ought to be on there..

RSSI: In UMTS that’s the signal power over the complete 5 MHz carrier which includes all components received, including the signals from the current and neighboring cells on the same frequency. In an isolated cell having only CPICH power to transmit and with none of the other channels utilized, the effective RSSI as seen by the UE would be (fraction of) PCPICH power. However, the RSSI changes when the 5Mhz carrier will carry power for other dedicated or control channels. In that case, the effective power perceived by the UE would be the transmitted power of the serving cell + the power transmitted by neighbor cells over the same carrier frequency.

RSSI, or “Received Signal Strength Indicator,” is a measurement of how well your device can hear a signal from an access point or router. It’s a value that is useful for determining if you have enough signal to get a good wireless connection.

Note: Because an RSSI value is pulled from the client device’s WiFi card (hence “received” signal strength), it is not the same as transmit power from a router or AP.

RSCP: The Received Signal Code Power: That’s the power level the pilot channel of a cell is received with and usually expressed in dBm (mW on a logarithmic scale). With this parameter, different cells using the same carrier can be compared and handover or cell reselection decisions can be taken.

EcNo: That’s the received energy per chip (Ec) of the pilot channel divided by the total noise power density (No). In other words the EcNo is the RSCP divided by the RSSI. And again in other words: The better this value the better can a signal of a cell be distinguished from the overall noise. The EcNo is usually expressed in dB as it’s a relative value. The value is negative as the RSCP is smaller than the total received power. As the RSCP this value can be used to compare different cells on the same carrier and handover or cell reselection decisions can be taken. 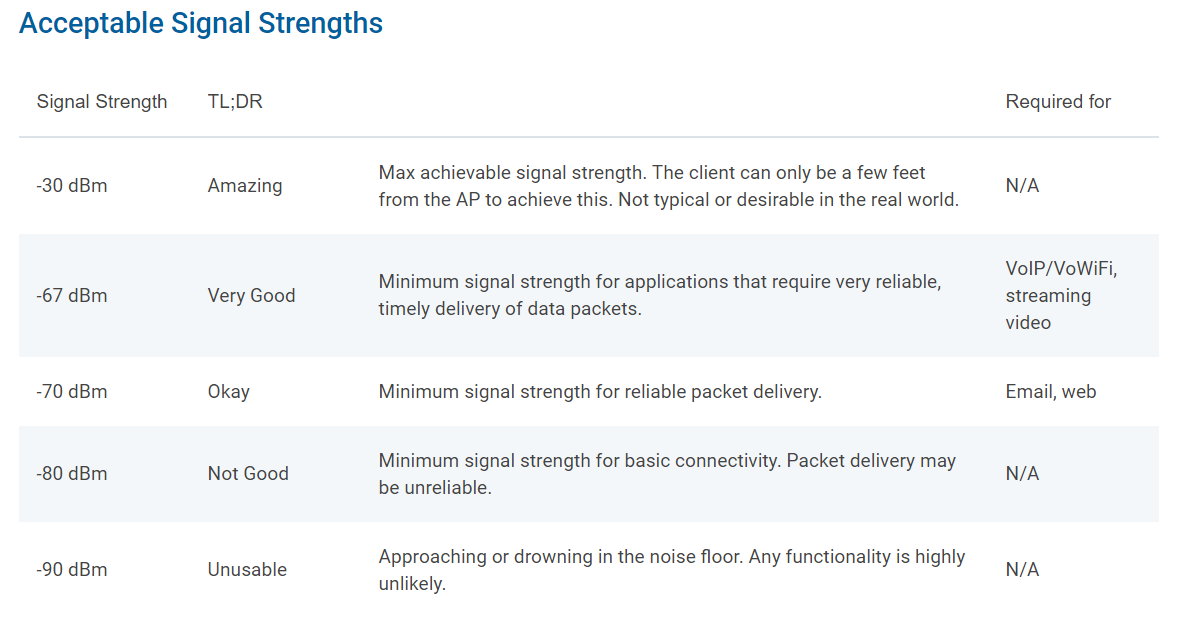